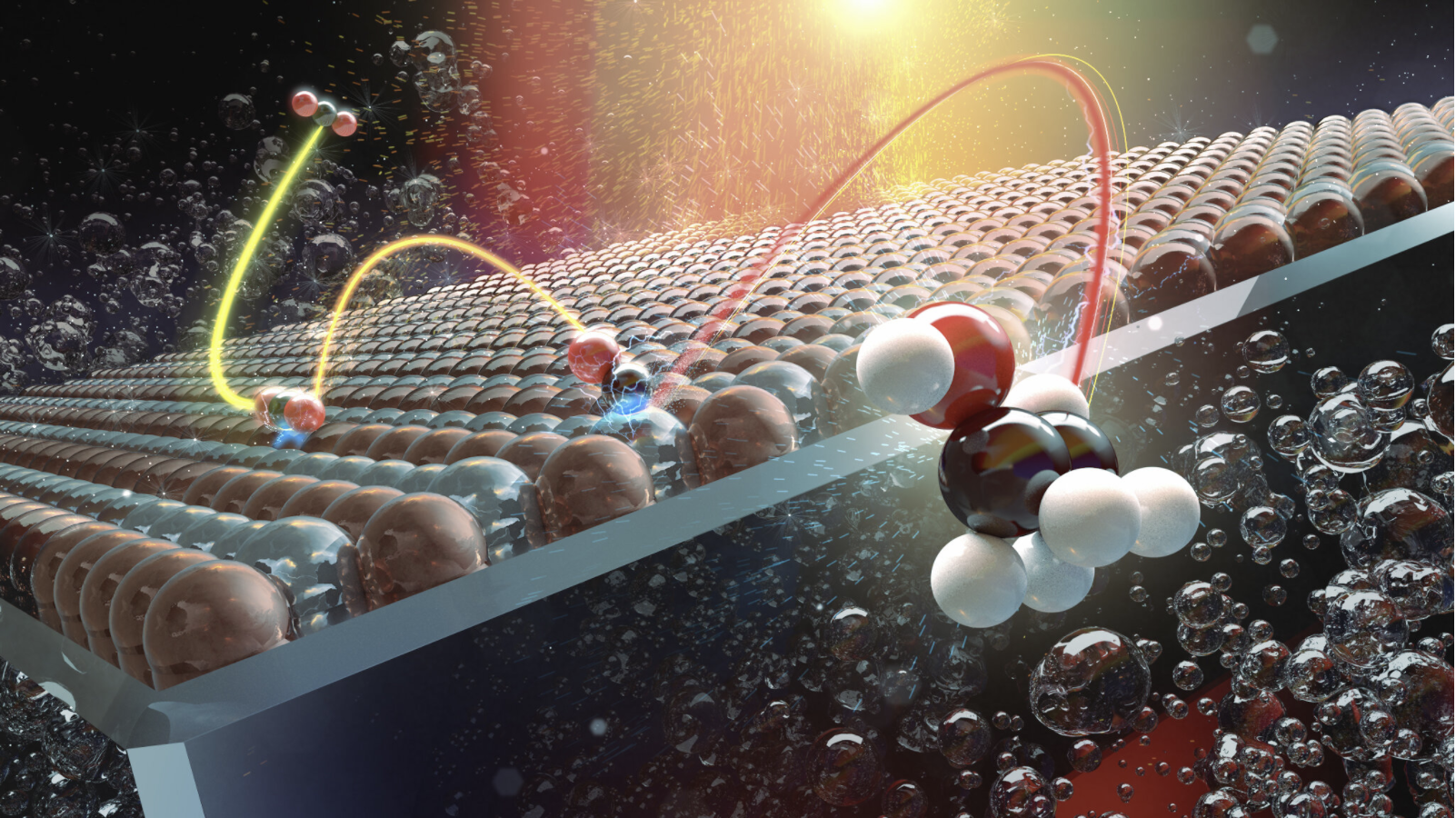 The simplest chemical molecule is composed of two hydrogen atoms, otherwise known as the hydrogen molecule. However, despite this deceptive simplicity, hydrogen stores a significant amount of chemical energy and possesses great potential to transition society’s energy sources from fossil fuels to carbon-neutral, alternative fuels.

Hydrogen gas can be produced by a process called water-splitting. With sunlight energy, water can be “split.”; during this process, two water molecules produce one oxygen molecule and two hydrogen molecules, as shown below:

In reality, water-splitting is not just one elementary reaction; there are multiple steps. First, the water molecules break apart–– single oxygen atoms combine to form oxygen molecules, while the positively-charged hydrogen ions and electrons freely roam around in the water-based environment. This first step is called the “oxygen evolution reaction” because oxygen gas is produced, or “evolved”:

Electrons and hydrogen ions then recombine into neutrally-charged hydrogen atoms. For every two hydrogen atoms, a hydrogen molecule is formed. This step is called the “hydrogen evolution reaction,” or HER:

Because HER is the final step to produce energy-rich hydrogen, substantial research effort has been devoted towards optimizing it.

HER cannot just happen alone; it needs a catalyst—in this context, some metal-based surface with active sites where hydrogen ions can recombine with electrons and attach to one another to produce hydrogen gas.

HER catalysts can come in many different flavors––platinum is the ideal catalyst performance-wise, but its rarity and cost deem it impractical. Thus, other materials need to be considered. An emerging class of materials are “2D materials,” named so because they are just a few atoms thick— sometimes only one. 2D materials have become of recent interest due to their intriguing properties that differ from their 3D counterparts. Such properties can be engineered and fine-tuned based on the atomic composition of the material. For example, graphene is a single layer of carbon atoms, yet it exhibits high mechanical strength and electrical conductivity.

Beyond graphene, there exists a diversity of 2D materials. One example is molybdenum disulfide (MoS2), whose molecular structure consists of a molybdenum atom sandwiched between two sulfur atoms. Researchers are investigating MoS2 as a candidate for HER catalysis because it has many appealing qualities; it is relatively cheap, abundant in Earth’s crust, chemically stable, and compared to non-platinum competitors, highly catalytic. In its pure form, however, MoS2 needs modifications before overtaking platinum.

To understand the performance gap between platinum and pure MoS2, HER catalyst quality can be quantified by the Tafel slope, which asks, “How much work is needed to produce electric current?” Electric current is required to “push” electrons  to recombine with hydrogen ions and produce hydrogen. A good HER catalyst requires less work to produce current, and thus has a small Tafel slope value. Pure MoS2 has a Tafel slope of 98 mV/dec, while platinum has a Tafel slope of 36 mV/dec.

To improve MoS2’s performance, scientists are engineering it to enhance its catalytic properties. A film of MoS2 is composed of a long range of MoS2 “atomic sandwiches.” Occasionally, there exist some defects, such as missing sulfur atoms. Despite being labeled as defects though, these “sulfur vacancies” enhance MoS2 as a catalyst.

Researchers found that sulfur vacancies in MoS2 films boost the material’s HER performance. They alter MoS2’s electronic structure so that hydrogen ions can more favorably bind to active sites and form hydrogen gas.With an optimal sulfur vacancy of around 7-10%, MoS2’s Tafel slope decreases to 65-75 mV/dec. As such, innovations in materials science can pave the way to make MoS2 a prime HER catalyst that facilitates hydrogen —and ultimately—water-splitting, into future sources of renewable energy.