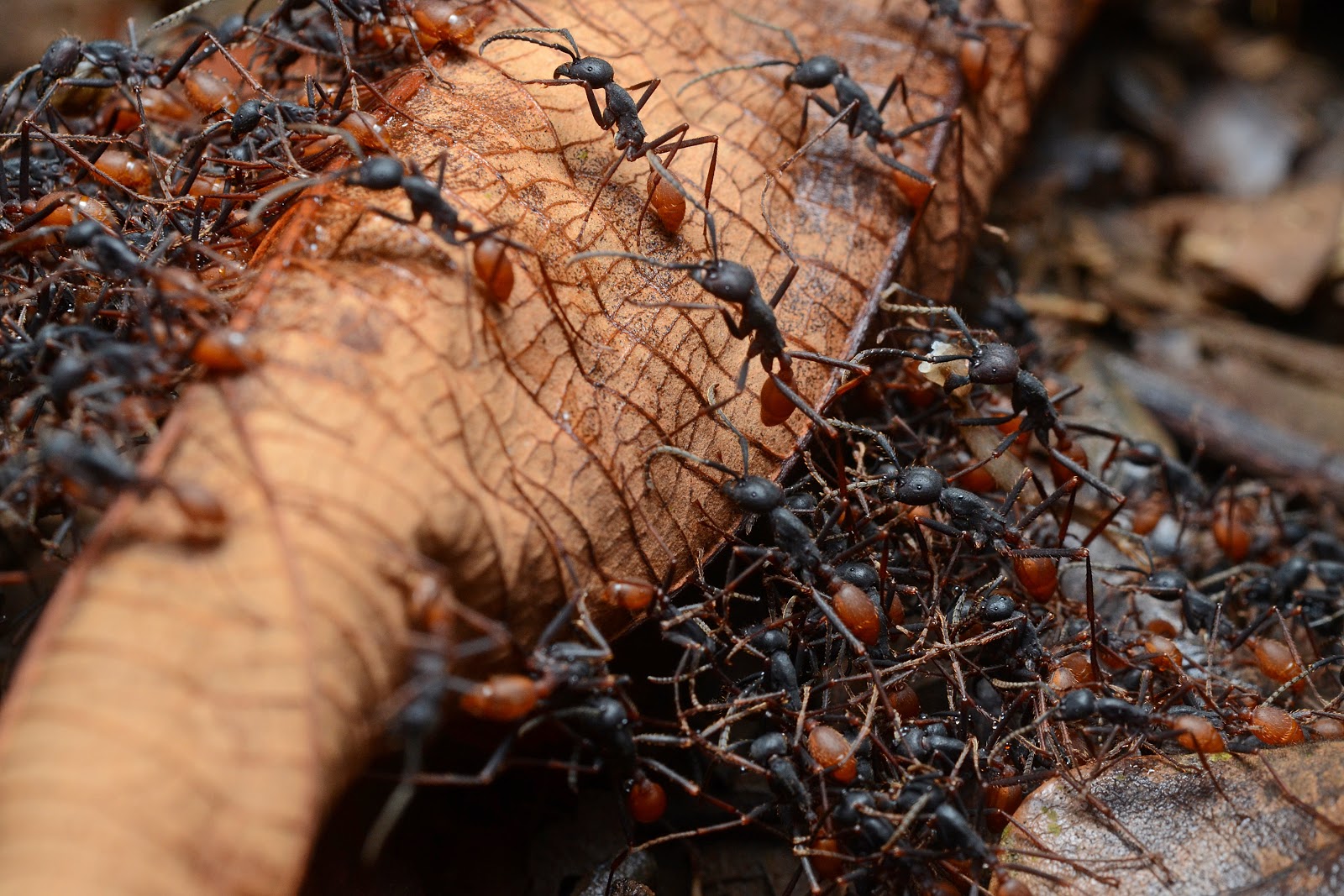 If you have ever had any interactions with ants, you many have witnessed the strange phenomenon of one ant carrying around the carcass of another ant. At first glance, this practice may appear to be part of a disturbing cannibal ritual. However, the ant is actually tidying up the nest. If the bodies of dead ants were left around wherever they dropped, their decomposed carcasses would make the nest a breeding ground for all sorts of diseases. That ant is doing one of the many tasks that must be carried out to keep a eusocial insect colony running.

Eusocial insects are those that live in the highest form of sociality. In order to be categorized as eusocial, a species must satisfy all five criteria that characterize social insects. These include parental care of offspring, group living, cooperative care of young, overlapping adult generations, and reproductive divisions of labor. The most popular species of eusocial insects are bees, wasps, ants, and termites.

The size of eusocial insect colonies range from including under one hundred individuals to having hundreds of millions. Each individual has a specific set of tasks that correlates with their physical traits and reproductive capabilities. For example, queen ants are the only female in their colony that are capable of laying eggs. Reproduction is her only job, and every ant in the colony is birthed by her. The other female ants are workers, and the male ants mate with the queen.

Because eusocial insect colonies live and interact so closely and all share their genes with a single queen, it was hypothesized that they were more susceptible to disease. However, it is now understood that these colonies have developed social immunity which acts as the immune system of the colony (Cremer et al.). Social immunity is the collective effort performed by the members of the colony either together or toward one another to prevent the uptake and/or spread of disease throughout the colony. These defenses can be behavioral, psychological, and organizational. For ants, some of the most common acts of social immunity include maintaining nest hygiene, such as removing dead members. Grooming or eliminating members of the colony that are infected with disease are also common practice.

Cremer et al., from the Institute of Science and Technology Austria, discuss how social immunity can be compared to the immune system of a complex multicellular organism. The key to this comparison the relationship of the fitness of the colony to that of a complex multicellular organism. Fitness is the ability to survive and reproduce in a given environment. For a complex multicellular organism, fitness is measured by its ability to survive at least until passing on its genes. However, for a eusocial insect such as an ant, fitness becomes more complicated. Every ant from a given colony is birthed by a single queen. Since only the queen reproduces, how does one measure an ant’s fitness? Well, for ants and other eusocial insects, fitness is measured at the level of the colony rather than at the individual level. An ant colony can be split into two categories: the ants that reproduce and the sterile ants that work to maintain the colony. The cells of a complex multicellular organism can be categorized in a similar way. The queen and the males that mate with her can be compared to the germline cells, or gonads. Meanwhile, the female worker ants can be compared to somatic tissue. Neither category can survive or reproduce without the other; therefore it is hypothesized that both systems operate similarly and have evolved due to similar evolutionary pressures.

It is important to note that there is not much evidence to support the existing hypotheses on exactly how these individual and collaborative defenses performed by the colony combine to achieve colony-level defenses. Although more research on social immunity has been done in the past decade, studying colonies as a whole in order to test the hypotheses is significantly more difficult than researching the smaller scaled social defenses discussed previously. Luckily, Cremer et al. argue that the technology to experimentally support these hypotheses already exists. This technology along with the ample research on the subject paves the way for new discoveries regarding the inner workings of social immunity and its evolutionary origins.