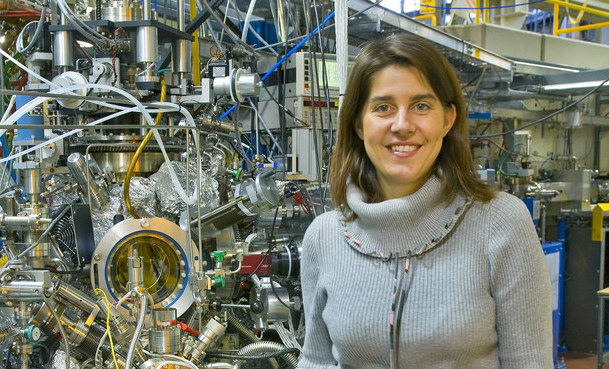 By Stuti Raizada and Melanie Russo

An outstanding quantum materials scientist, Alessandra Lanzara is also a lover of sustainability and teaching for the greater good. Her research uses Angle-Resolved Photoemission Spectroscopy (ARPES) to study the electronic and magnetic properties of the unusual ground states of novel materials and further understand high-temperature superconductors, femtomagnetism, and much more. In her team’s pursuit to fully understand the quantum theory of both insulating and conducting solids, Lanzara strives to transform materials into sustainable, self-assembling and self-recycling structures for a brighter future.

AL: I didn’t realized I liked physics until the last year of high school. I was studying Greek philosophy, classical physics, and a bit of math in high school in Italy. My physics teacher brought the class to an amusement park. She told us to take a ride and gave us homework on describing the forces responsible for the motion of the ride. I loved it so much that I told my parents, “I am going to be a physicist.” They told me that I have no idea what physics is and yes, I had absolutely no idea at that time. But after graduating from high school, I went on to study physics in college. It was really hard because I had very little knowledge of math. I was really behind my peers. I didn’t even know basic trigonometry. The first semester was really tough, and I was contemplating changing my field of study. But after taking more classes, I started loving it. I loved every single class I took. And now, I’m here. My original interest was in biophysics, and even today I’m really interested in it and am starting to do research in the field. My advisor was a biophysicist. He was working with the Stanford Synchrotron Radiation Lightsource. There was a lot of talk about superconductivity at room temperature at that time. So I decided this is what I would like to work on.

BSJ: Could you describe ARPES?

AL: Ultimately, the properties and behavior of materials are governed by electrons and the way they interact inside the solid. Mapping the position of the electrons, their energy and scattering process can reveal intrinsic properties of materials and provide basic understanding in the design of devices. Angle-Resolved Photoemission Spectroscopy, also known as ARPES, is a microscope for measuring the electrons in the momentum space, the space where electrons live. This technique is based on the photoelectric effect discovered by Einstein at the beginning of the 20th century. By using photons to take out electrons from a material, one can simultaneously map their position and energy in the momentum space. So far ARPES has been instrumental in revealing properties of materials and furthering our understanding of quantum materials.

Electrons have another quantum number associated with them, which is the spin. This quantum number turns out to be very important to define the properties of a newly discovered class of systems, the topological insulators [materials in which charge can only move on the surface]. Each electron in its position in the momentum space has one and only one spin direction. Spin quantum number is also fundamental in magnetic materials such as ferromagnetic materials [materials that retain their magnetization when the field is removed], where the spins are all aligned. In my lab we have developed a new tool, spin-ARPES, which allows us to look at the charge and the spin at the same time, opening up new frontiers in the study of materials.

Today, we study materials by freezing them in time and then taking a snapshot to figure out how they behave. The future, however, lies in studying materials in real time, which means to take a picture while they are in action.  For example, think of the behavior of a material in a device, be it a transistor or a photovoltaic panel. There can be variables and interactions you didn’t account for that change the way the material is actually behaving. We can understand this using the analogy of the first camera. People were trying to understand how horses run: do they raise both legs or one leg at a time? When they took a picture, it was static and they could not understand the motion. But then video cameras came, which took pictures very fast, and hence, motion of the horse could be understood. This is similar to the time domain in which we can study materials in motion. We are now applying some of the newly developed time-resolved tools in my lab to biology to understand some of the key driving principles of life formation. 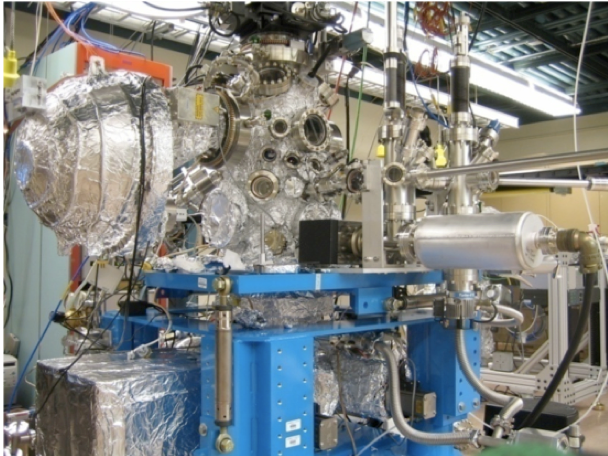 Figure 1. Photograph of the spin-ARPES. This experimental tool allows Lanzara to peer into the secret lives of electrons, and could one day allow her to change a material’s properties using just a flash of light.2

BSJ: Where do you see your work with time-resolved ARPES and high-temperature superconductivity going?

AL: Quantum materials are materials where quantum mechanics play a key role. Reduced dimensionality, electron-electron interactions, or topological constraints give rise to unconventional ground states such as high-temperature superconductivity, self-organizing electronic crystals, topological insulators, quantum spin liquids, and spin ices. This is quite different from standard materials such as silicon where only one ground state exists. We have mastered these materials over the past several decades, in which the properties are well-defined. Novel phases prompted a radical change of perspective and led the field into new territories at the interface between many-body physics and topology and between hard and soft matter physics. The idea is often times, when you think about a material, it is like a protein. The tertiary structures are folded, the quaternary structures are folded, the area of the beta helix is folded, and so on. The protein does it by itself. But how does a material, not a protein, jump from one state to the other? Well, quantum materials are available in all these different states, but they populate only one. When we study superconductors, we see that there are many other accessible states. So the idea is that you have the same thing as in proteins. The protein changes states by itself because it is very smart. How can you create a material that jumps from one place to another with a laser? If I can target the exact energy for which the material has this property, then I can bring it to a totally new state. So imagine now that you can use a laser to switch a material from an insulator to a metal. Or a semiconductor to a superconductor. I call this process “light switches” because you can just turn the “light” on and off and it will completely change the material. 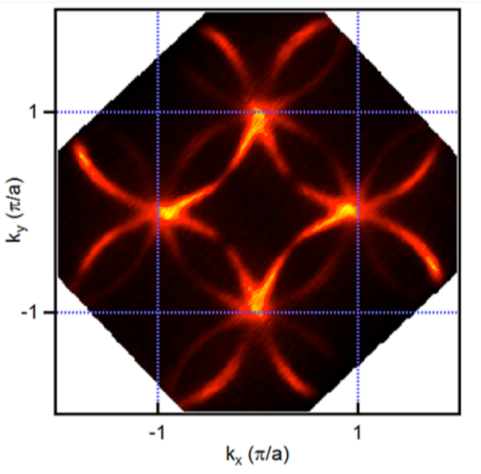 Figure 2. Fermi surface of a lead-doped sample of a cuprate superconductor detected by ARPES. This surface image manifests the occupied electronic energy bands (red) in contrast to the unoccupied electron states (black).3 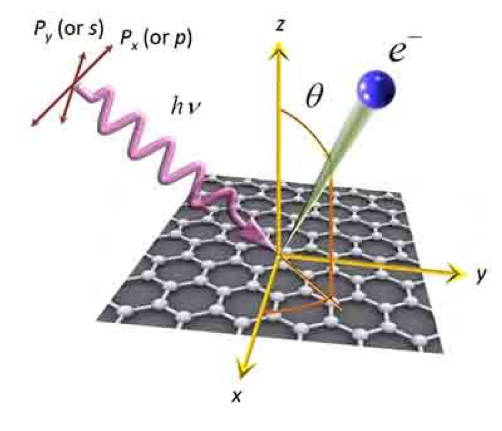 Figure 3. A representation of the ARPES laser hitting an electron. Measurement of the electron’s kinetic energy and exit angle gives information about the momentum and energy of the electron state in the material.4

BSJ: What is the current crisis in the field of materials science?

AL: This brings me to another problem that I started to work on. We are creating a center here in Berkeley called the Agile Materials for a Sustainable Future. The whole idea is that sustainability is a big issue. My kids will come home and say “Mom, did you know the ocean is filled with trash?!” It’s good that school is brainwashing them. The other day I came home with a plastic bag from the supermarket and my son told me “Mom, the average lifetime of one of these bags is four minutes.” We are so used to throwing it out that we don’t think about it. So, I started to think seriously about sustainability two years ago, and a lot of it was inspired by my kids. I have to think: what are we leaving for them? And it is true that there has been a lot of effort and new policies, and things have changed a lot already, but we are not there yet. The rate of consumption is going just too fast, and we are digging more and more resources, which is a huge problem. So the big thing that I realized is that the way we are trying to solve this problem is not the complete solution, because the real problem starts from materials. When I am making a better battery that makes your cell phone last longer, I’m really not doing a good service to society. I am giving you a nice device, but this means that you will throw out the cell phone you already have that has a lifetime of about six years, because now after a year you want a new phone. And so you just throw it away and get a new one. This is true for everything like plastics and other materials. With the way our society works, the science of materials has led us to an incredible way of living from which we are all benefitting today. But the backside of this story is that these materials are destroying the planet, and we don’t talk about it. I truly believe that the solution comes from people like me, who are improving materials rather than thinking about policy or the end product.

BSJ: So how do you plan to reach a future of sustainable materials?

AL: If your end goal is to buy less plastic bottles, you are still using plastic bottles. So how can I make a plastic that is self-recycling? Or, how can I make the electric part of computers easy and cheap to fix and break apart so we can reuse their parts instead of throwing them out and buying new ones every few years? I’ve been encouraging a lot of people in my field to rethink the way we make materials. The only materials we know of that are capable of self-assembly and breakdown are things we see in nature. These are the only materials I know that are so smart. Can we learn from nature? Can we make a material that can self-assemble and self-disassemble with multifunctionality, just like proteins do in nature? This is where all the research is going. So a lot of the thinking that happens in my group is how we can make this happen.