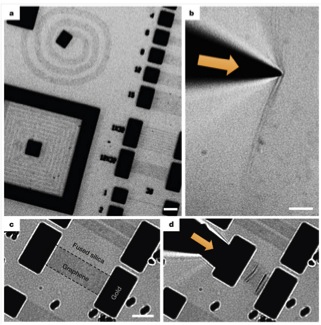 In the past few years, the search for new and exciting two-dimensional materials has taken over both the field of material science and nanotechnology. These materials have displayed previously unimaginable characteristics, including their novel electronic properties or extraordinary mechanical characteristics, making them some of the best candidates for solving some of the world’s toughest problems in numerous of scientific disciplines. One of the most promising candidates in field of research is graphene, a single-atom thick layer of carbon atoms arranged in a hexagonally tiled formation.

Researchers at Cornell University have become interested in some of the mechanical properties of graphene. Some of the most significant findings have been discovered by a man named Paul L. McEuen, who is the corresponding author on the newly published Nature paper entitled “Graphene kirigami”. McEuen realized that a sheet of graphene, given its strength and resilience, could be used to build complex three-dimensional structures by playing an analogous role to paper in the art of kirigami. The word “kirigami” is derived from the Japanese words “kiru”, meaning “to cut”, and “kami”, meaning “paper”. The ability to fold and cut sheets of graphene into a seemingly infinite number of nanoscale, durable structures could revolutionize the role graphene plays in a number of research fields. Simple kirigami spring made of (a) paper and (b, c) graphene

McEuen’s group first sought to identify whether or not graphene has the correct physical characteristics to be used for kirigami. One of the most important material parameters for kirigami is a material’s Föppl-von Kármán number, which is a ratio of the material’s in-plane stiffness to out-of-plane bending stiffness. Using several different nanoscale material testing methods, his group found that the number associated with graphene was very similar to that of paper, making it an excellent medium for kirigami. With these promising results, his group proceeded to successfully cut and fold sheets of graphene into simple, nanoscale mechanical systems, such as springs and hinges. These devices can be manipulated using not only physical means, but also magnetic means by attaching the ends of the springs or hinges to small blocks of magnetic material. This feature would allow for remote control over such systems, thus allowing for a myriad of new applications in nanotechnology. Researchers at Shanghai Jiao Tong University have explored the possibility of creating new two-dimensional materials out of other group-IV elements, following the precedent set by carbon in forming sheets of graphene. Previously, two-dimensional, silicon-based silicene and germanium-based germanene had been synthesized and examined. The experimentally unprecedented synthesis and characterization of a material called stanene was achieved by a team lead by Jin-feng Jia, who is the corresponding author on the recently published Nature Materials paper entitled “Epitaxial growth of two-dimensional stanene”. Stanene is a 2D allotrope, or atomic configuration, of tin atoms that form a buckled honeycomb lattice, comprised of two triangular, offset sublattices of tin atoms. The thickness of this system is about 0.1nm, which fluctuates slightly depending on the material’s surroundings. Molecular structure of stanene, top and side views

Jia’s group was able to grow these single layers of stanene upon a substrate of Bi2Te3 using a technique called molecular beam epitaxy (MBE). Through MBE, a substrate is placed in a chamber at extremely high vacuum pressures. The material one wishes to deposit is then heated until it becomes gaseous, which condense upon the surface of the substrate. Reflection high energy electron diffraction (RHEED) is many times used to monitor the progress of this process. Jia’s group then analyzed the atomic and electronic structures of the stanene and Bi2Te3 system and found that experimental data they obtained agreed quite well with their theoretical predictions and calculations. If you’d like to read more about the developments in graphene kirigami, check out the full paper at the following link:

If you’d like to read more about the developments of stanene, check out the full paper at the following link: