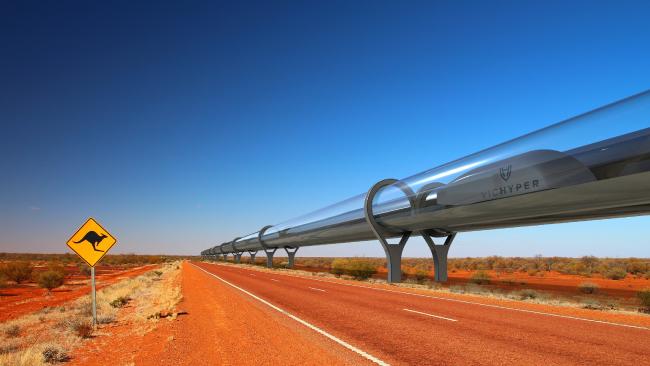 “We’re not selling transportation, we’re selling time” (“Hyperloop One”). The slogan of Hyperloop One encompasses the revolutionary, efficiency-centered attitude that both their organization and the world as a whole are adopting. Imagine taking a train from Los Angeles to San Francisco in under half an hour. For someone that lives in California, traveling that fast seems preposterous if not impossible as a flight takes approximately an hour and a half while driving takes six hours, and that’s without taking traffic into account. However, this is exactly what Hyperloop One aims to achieve. This up and coming company, originally known as Hyperloop Technologies, was founded in 2014 by Shervin Pishevar and Josh Giegel (“Hyperloop One”) and is based in Los Angeles, CA (“Company Overview of Hyperloop Technologies, Inc.”). Their goal is to create a resource- and energy-efficient, safe, and fast mode of transportation to be used all around the world in order to better fill the demanding market that is currently caving under the pressure of buses, trains, planes, and car traffic. Not only do they plan to significantly improve the technology in use, increasing speeds to seven hundred miles per hour, but they also aim to make it affordable as well. They strive to have their services “move people and things at airline speeds for the price of a bus ticket” (“Hyperloop One”). This concept and the technology behind it was first suggested by Elon Musk in a 58-page paper titled “Hyperloop Alpha” (Bradley). He suggested a with a nearly vacuumed area inside that transported floating pods with the help of fans and electromagnetic propulsions from along the inside tube walls as well. Now, several years later, Hyperloop One has been working hard to make his vision a reality.

Not only does this seemingly impossible technology work but it also is becoming more and more realistic in the near future. Hyperloop One is currently running tests in Northern Las Vegas in a flat, empty stretch of land which allows them to run tracks of reasonable lengths. The team is looking into details in production much more closely now than Musk had done in his original outline. For example, while Musk’s outline called for solar cells on top of the tube to send bursts of energy that will help propel the pod, Hyperloop One realized the potential challenges that purely solar power would impose and how variable it would be depending on geographic and climatic conditions in which a tube may be built. This would especially problematic when considering the sheer stretch of distance that one tube might cover (Bradley). While the hyperloop energy source is still in the works, the company is said to be aiming to make their technology available to use with any power source (Bradley).

While this technology is becoming more and more realistic, it is still not a reality. Many critics, including Jose Gomez-Ibanez, professor of urban planning and public policy at Harvard University, state that the cost of building the tracks to begin with will prove an obstacle that the company will not be able to overcome (Bradley).

Nevertheless, the Hyperloop One team continues to persevere and inspire others with their innovations. Recently, universities across the United States have founded Hyperloop teams, all with the goal of advancing the feasibility of this transportation technology. UC Berkeley’s own team of undergraduate and graduate students was founded in 2015 (“Berkeley Hyperloop”). and has recently competed in “The Official SpaceX Hyperloop Pod Competition” near SpaceX headquarters in Hawthorne, CA (“Hyperloop”). They competed against teams from across the country with a common goal of developing the most plausible and efficient hyperloop pod design to be propelled within the tube.

First there was the revolutionary discovery of the wheel. Then with the industrial revolution came the train. Next, the Wright brothers brought us the airplane. With further research and testing, Hyperloop One as well as the bright young minds on university hyperloop teams may just propel (pun intended) humans into our next transportation revolution.