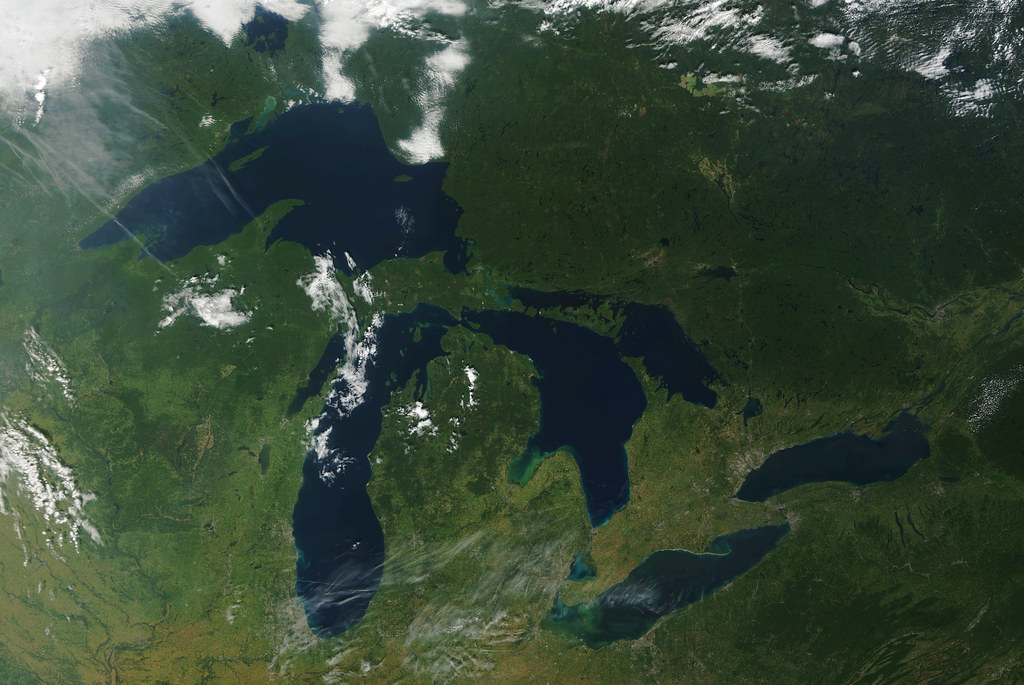 Why the Great Lakes Aren't Getting Better

In California you often hear about drought, water conservation, and fires. The problem with water is the lack of it. However, in the United States midwest they don’t have fires or droughts or anything that seems like they should be worried about their water. However, the midwest doesn’t have a lack of water problem, they have a polluted water problem.

The Great Lakes in the midwest have suffered many problems due to agriculture induced algal blooms over the years–specifically the process of eutrophication. Eutrophication is a process of growing and dying algae that can cause dead zones in a lake. The process begins with an excess of nutrients being deposited into a waterway by runoff or atmospheric deposition. The most common nutrient pollutants are nitrogen and phosphorus that are contained in agricultural fertilizers. The nitrogen and phosphorus and the nutrients they bring to the lake cause an excessive amount of algae to bloom. For a short period of time, this is good. The algae goes through photosynthesis as it is growing and produces oxygen. More and more algae builds up causing some of it to stop getting sunlight, without light the algae starts consuming oxygen. The influx of nutrients is not enough to sustain that much algae, this means that only after a short period of time, when the nutrients run out, it begins to die. Bacteria comes to break down the dying algae and the decomposition process uses up the oxygen in the water for respiration, leaving the water with less oxygen than it was before. In the worst case scenario oxygen becomes completely depleted, this creates what is called a ‘dead zone’—nothing can live in the water anymore.

The Great Lakes are continuing to exhibit more and more dead zones from eutrophication. Agricultural practices in the Midwest use excess synthetic or manure fertilizer, both of which introduce excess nitrogen and phosphorus into the environment. Because of the worsening situation despite new regulations, multiple studies have been conducted to try and figure out what’s happening.

In December of 2019, a team of American and Canadian scientists set out to redevelop the models that were estimating the source of excess phosphorus and nitrogen in the Great Lakes. The previous model, called SPARROW, created in 2002, relied mostly on the American side of the Great Lakes. Because of this, researchers speculated that the amount of nitrogen and phosphorus being added to the environment was inaccurately calculated. The new SPARROW model was created to fully describe where the nutrients are coming from on both sides of the Great Lakes Basin.

For the new SPARROW model the team took samples of 1197 phosphorus sites and 1101 nitrogen sites. They used less sites than in 2002 while increasing the area that the sites came from (both the U.S. and Canadian sides), this was done to make sure that there weren’t any interactions between the sites. In the old study many of the sites were close together, the new research team thought that this caused an overestimate of the numbers of phosphorus and nitrogen calculated because of a sort of ‘double counting’. At each site, they measured the nitrogen or phosphorus in the soil and then derived a coefficient for the contribution of nutrients to the Great Lake Basin. The data from this study showed that, unlike the first model, each lake has its own unique biggest contributor to excess nutrients, it’s actually not all fertilizer, and not all the lakes have the same largest source. Overall, the data showed that most phosphorus comes from wastewater treatment plants, while the most nitrogen comes from the atmosphere. These were the biggest differences in the original model, which said that fertilizer deposited the most nitrogen.

These calibration statistics were far greater than the original model because of the increased area that they looked at when making the model, using both the U.S. and Canadian side of the great lake basin made the data more accurate, and showed why the new regulations weren’t entirely helping—there are two sides to the story. This new model is incredibly important for searching for a possible solution to the eutrophication problems in the Great Lakes. It also helps show the severity and the degree of the decline of each individual lake with more accuracy. This should help quantify the needs of each lake with more accuracy.

Finally, the data revealed that the amount of nitrogen going into the great lakes is increased by atmospheric deposition from the nitrogen cycle. As global warming continues, along with the excess fertilizer use, we are actively changing the nitrogen cycle, creating more deposition into the Great Lakes. Ultimately the more nitrogen we put into the cycle from synthetic fertilizers, the more of it is going to end up into the Lakes, which isn’t where we want it. This has caused more monitoring of nitrogen levels by the EPA and sampling water in the lakes.

It is true that the midwest has lots of water, but it is quickly becoming unusable, without more regulations, or different agricultural practices, the great lakes may not be able to provide the nourishment to us or the environment that it is counted on to do. The Great Lakes will need continuous moderation, and more regulations will need to be put into place if we ever expect to see changes and improvements in the Great Lake Basin.